The Vintage Ohio festival took place over Friday and Saturday last week August 3 and 4, in blazing hot sunshine.  Saturday’s crowd at Lake Metroparks Farmpark in Kirtland, Ohio was the larger of the two days when people poured through the gates to sample wine, listen to cooking demonstrations, and meet the winemakers.  Two stages supplied music on either end of the park, catering to different tastes in soul, jazz, country and Caribbean.   Tickets were $25 each for tastings and a logoed souvenir wine glass.  The Ohio Wine Producers Association estimates about 20,000 people attended Vintage Ohio.

Nick Ferrante of Ferrante Winery with another happy customer 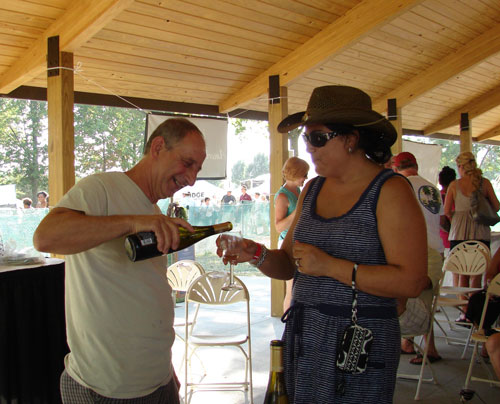